All about 9 days of Navratri 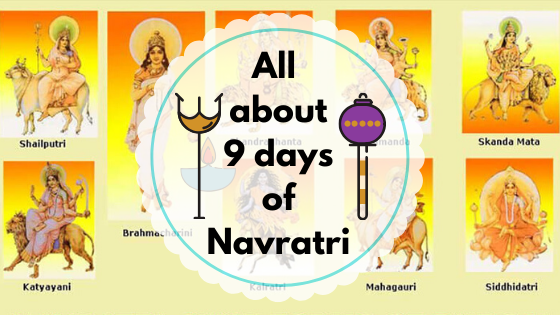 Navratri is considered as one of the most important and sacred festivals in India. People worship Goddess Durga and her various forms which are the epitomes of power. In India, it is believed that if someone worships the Goddess Durga with all their heart, then she destroys all the evils and gives peace to the worshiper. From Shailaputri to Chandraghanta, Skand Mata to Siddhidatri there are different forms through which Durga ma showers blessings on her devotees. Do check out all the nine avatars of Durga ma below.

Shailaputri means the daughter of the god of mountains, Himalayas. This incarnation of Durga maa is a combination of powers from Brahma, Vishnu, and Shiva. She rides a bull, Nandi(the vehicle of lord shiva) and carries a trident(three-pointed spear) in one hand and a lotus in the other hand.

For nearly three thousand years, she ate only fallen leaves and slept on the floor to complete her tapa to marry Shiva. That’s how she got the name Brahmacharini. On one hand, she holds a water port and the other holds a rosary. She symbolizes love and faith. She is a store-house of knowledge and wisdom.

Maa Chandraghanta represents a golden tint on her skin with ten hands and three eyes. Eight among her ten hands display weapons while the other two are in the mudras of gestures of boon giving and stopping harm. Chandraghanta, represents bliss and knowledge, showering peace and serenity.

Devi Kushmunda is with eight hands holding weapons and a mala or rosary. She mounts a tiger and has a solar-like aura around her. This avatar of the goddess is considered as the creator of the universe. It is believed that she has created this universe with laughter.

Lion as a vehicle this goddess holds her son, “Skand”, Karthikeya in her lap and also displays three eyes and four hands in which two hands hold lotuses and the other two respective hands display defending and granting gestures. There’s a belief that by the mercy of Skandmata, even an idiot like Kalidas can be blessed with a treasure of knowledge. This avatar of the goddess tells that a mother can fight anyone when the need arises to protect her child.

Katyayani stayed in the ashram of Katyayan. This sixth Devi also mounts a lion and is with three eyes and four arms. A weapon in the left hand and a lotus in the other hand. The other two hands display defending and granting gestures. She is dressed in orange and exhibits immense courage.

A ferocious lady with black skin, plenty hair and four hands, two holding an ax and a light, while the remaining two are in the mudras of “giving” and “protecting”. Unlike other avatars, she is mounted upon a Donkey. She is a destroyer of darkness and ignorance. Kalaratri’s temple is famous in Calcutta.

Maha Gauri is with the fairest complexion of all the Durgas. Fairest complexion, peace, and compassion are her attributes. She is often dressed in a white or green sari by holding a drum, a trident and is often represented riding a bull. This eighth avatar of Durga ma represents intelligence, peace, prosperity, and calm.

She sits upon a lotus with four arms. Maa Siddhidatri’s famous pilgrim center, is located in Nanda Parvat in the Himalayas. The goddess is known for having supernatural healing powers. The goddess is represented with a blissful state of mind, just like a clear sky.